In the world market, impressionists and post-war artists are still the best investment. On the art scene, women artists sounded louder.

Western museums began to pay special attention to the origin of even very large monetary donations. The wave began in March and is associated with the Sackler family, whose several generations have been generous donors to almost all the world’s largest museums, including the London Portrait Gallery and Tate Modern, the Victoria and Albert Museum and the Royal Academy of Arts, the Guggenheim Museum, the Louvre and the Metropolitan, to whom the Sacklers gave nothing less than the ancient Egyptian temple of Dendur, which could have been destroyed during the construction of the Aswan Dam, but was removed and restored in the main New York museum. The family success story began at the beginning of the 20th century, when the first Sackler moved from a village in what is now Ukraine to Brooklyn and opened a grocery store, and his three sons suddenly became interested in medicine. The pharmaceutical empire was built in a short time, and the essence of the current scandal is that the OxyContin painkiller, which is produced by the Purdue Company owned by the Sacklers, is causing opioid addiction, which in 2017 alone led to the death of 47 thousand people, and the total number of victims was more than 200 thousand. . Since the end of March, when the trial in the Sackler case began in court, museums have been forced to respond to the situation. The London Portrait Gallery and the Tate have announced that they are no longer accepting donations from them (the family trust has tried to soften the situation by saying it is suspending charitable work in Britain). Then the famous photo artist Nan Goldin appealed to other art institutions to boycott the company.

A wave of ethical protests also affected other philanthropists. A large protest campaign has unfolded against Whitney Museum vice chairman Warren Kenders, whose company Safariland produces tear gas that has also been used against migrants on the American border. Other activists denounced the New York MoMA for collaborating with Larry Fink, whose BlackRock company is investing in prison construction. Both museums have so far managed not to respond to pressure, but it is clear that even the richest people on the planet are finding it increasingly difficult to “whitewash” their reputation with the help of charity.

Unique – three large museums, three large private collections, three characters and ways of collecting were combined into one project that stretched over several years. The first exhibition took place two years ago – the Louis Vuitton Foundation in Paris showed the collection of Sergei Shchukin, for the first time since the late 1940s, combining works divided between the Pushkin Museum and the Hermitage. Even for Paris, which is nothing but the Impressionists, it was a sensation – in four months the exhibition was viewed by more than a million people. In mid-June, the main part of the project was opened – the exhibitions of Shchukin (or rather, the Shchukins, they also show the collections of the brothers, not so famous, but no less interesting) in the Pushkin Museum and the Morozovs in the Hermitage. 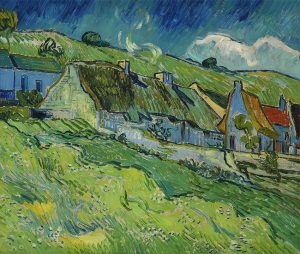 The collections assembled before the revolution by two Moscow merchants, industrialists and patrons of the arts are rightfully considered to be among the best in the world. A broad soul, sincere interest and great opportunities allowed both to create in Moscow mansions a full-fledged museum of the most advanced art at that time. Shchukin was the first in Russia to buy Monet (he had 13 canvases), bought out most of the Tahitian cycle of Gauguin, then he became interested in Picasso, Cezanne, Matisse, who painted on his order almost the key panels for all his work “Music” and “Dance” . Morozov simultaneously hunted for Cezanne (the hunt was successful – 18 excellent works), bought Van Gogh, Degas, and for interiors he ordered large-scale panels “nabidam” by Denis and Bonnard.