At the end of March, after ten years of construction, the Qatar National Museum opened in Doha, one of the main attractions of which is the unique architecture of the French star Jean Nouvel. After its foundation in 1975, the museum, which tells the history of the region from antiquity to the present, was located in the old royal palace of Al-Thani, built by the son of the first Qatari ruler in the early twentieth century. Small by today’s standards, the building quickly became small for the collection, and in 2002 Nouvel was invited to work on a new cultural symbol. The first project was supposed to grow not up, but deep into the ground, and it was quickly abandoned. 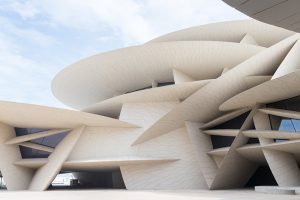 Since 2008, the architect has been working on the current building, inspired by the “rose of the sands” – an incredible natural phenomenon, a mineral that forms in sand rich in gypsum and really resembles a flower with thin petals in shape. In Nouvel’s interpretation, petals—giant disks of sand-coloured fiber-reinforced concrete—combine at different angles, creating a curvilinear structure with sloping floors and walls inside, with ever-changing room shapes and an outside panorama. Complex from both a visual and an engineering point of view, the design combines the calm silence of the desert with the dynamics of skyscrapers, against which it now flaunts on the bay.

Having recovered from the pandemic, the art world is proclaiming new values. For the first time at the Venice Biennale, 90% of the participants in the main project are women. And fantastic scenarios involving artificial intelligence are becoming more and more real.

In Search of Humanism, under this title, Ai Weiwei’s retrospective, the largest of his entire career, opened in Vienna’s Albertina Modern in March. Objects, photographs and videos trace the path of an artist who tirelessly fights for human rights, criticizes political hypocrisy, censorship and authoritarianism, but he himself is often criticized for the fact that there is more actionism in his actions than art, and his name sounds louder, than the reported problems. The exhibition features the famous installations of sunflower seeds, bicycles and stools, where many of the same objects serve as a metaphor for unnamed Chinese workers and are reminiscent of Duchamp’s readymades, as well as early works from the 80s. In recent years, Aya has been concerned about the problem of refugees around the world. In the new installation, a large glass ball reflects the viewer along with the mountain of life jackets on which it is mounted – a hint of how unsteady the edge of a calm existence is. 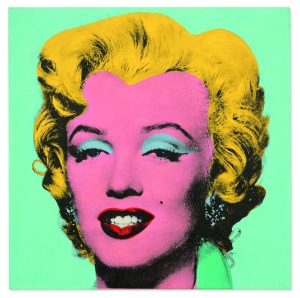 The most expensive piece of art of the 20th century and second on the list of top sellers (after da Vinci’s The Savior of the World) was Andy Warhol’s Shot Through Sage Marilyn. In May, in New York, Christie’s sold silk-screen printing for $ 195 million. In 1964, Warhol developed a more advanced screen printing technique, in which a limited number of works were created, including a portrait of Marilyn. Then there was an incident – the artist Dorothy looked into the workshop Podber asked permission to shoot the paintings against the wall, but instead of a camera, she took out a revolver and fired directly into Monroe’s forehead, piercing four canvases.The work was sold by the foundation of Thomas and Doris Ammann, a brother and sister who owned a modern art gallery in Zurich.In 1986 They bought Marilyn from the mastodon of the world art market Larry Gagosian, and now Larry has bought her back.

The most impartial nomination of the Venice Biennale is for the contribution to art. This year, the honorary Golden Lions were awarded to German sculptor Katarina Fritsch and Chilean artist Cecilia Vicuña. Fritsch creates whimsical, hyper-realistic images of animals. Notable works include The Rat King with huge black animals gathered in a circle, and a bright blue rooster that stood in Trafalgar Square in 2013. Vicuña works with the themes of memory and exile, and is known to the public for her installations made of threads of bright red wool, referring to the ancient knot system of counting and writing of the Incas.