One of the most famous artists, Vincent Van Gogh, was born on March 30. On the occasion of the genius’ birthday, we recall his most famous works. A largely self-taught and underappreciated artist during his lifetime, Vincent Van Gogh created more than 900 paintings and 1,100 works on paper over a ten-year career. Today, his canvases are masterpieces of world painting, which are included in the list of the most expensive paintings in the world. It is symbolic that they gained popularity only after the death of the artist.

Van Gogh’s early works were created under the influence of Jean-Francois Millet and the artists of the Barbizon school – these are harsh portraits of Dutch peasants and depressing rural landscapes. In 1886, he moved to Paris, where Impressionism and Neo-Impressionism greatly influenced him. His palette became lighter, he experimented with shorter strokes and additional colors. The paintings that Van Gogh painted in Paris embody the bold post-impressionist style. Emotionally unstable, full of doubts, Van Gogh, who had no orders and no means of subsistence, after trying to settle in Paris, moved to a refuge in the south of France, where he painted landscapes, portraits, interiors and still lifes. Vincent van Gogh is a Dutch Post-Impressionist painter whose work, practically unappreciated during his lifetime, has become the property of mankind, a phenomenon far ahead of its time. The creator, for whom there were no canons and restrictions, an artist who was not understood and not recognized by his contemporaries, a man whose life full of madness and loneliness ended tragically – all this is about him, about an artist who belonged more to his works than to himself.

In just ten years, van Gogh created approximately 860 oil paintings and more than 2,100 works in various genres and techniques. His capacity for work surprised, and the ability to see not the form, but the essence, was amazing.

Vincent was born, the eldest child in the house of a Protestant priest, March 30, 1853 in a village in the south of the Netherlands. He was a difficult, unusual child who always kind of stayed on the sidelines. The boy received his education first in a village school, then in boarding schools, but soon he suddenly dropped out of school.

Van Gogh got a job in his uncle’s company, which was engaged in the sale of paintings. At first, things went very well and Vincent was even transferred to London. But over time, such work began to become a burden for him. The artist tried to find his way, devoted a lot of time to the Bible and was even going to become a priest. He taught and preached extensively, and painted at night to earn a living.

Shocks rained down on Vincent one after another: his desire to become a priest was not destined to come true, love feelings were rejected, hopes for family life were destroyed, and relations with relatives were deteriorating. This greatly influenced his mental state, and the only salvation was painting and a close relationship with his brother Theo, who always supported him, including financially. 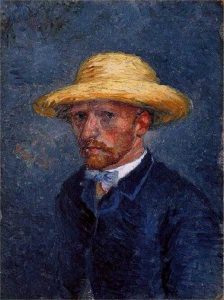 The artist moved to Paris, where he studied the works of the Impressionists and Japanese painters.

The latter greatly influenced van Gogh’s style of writing. But despite the obvious growth, unconditional talent and a clearly traceable unique style, the public and critics did not really notice Vincent’s work, which was very painful and depressing for him. He moved to the town of Arles, where he was going to create a kind of fraternity of artists. A well-known incident also took place here, when, on the night after a quarrel with Paul Gauguin, van Gogh cut off his earlobe. He was placed in a psychiatric hospital.

After being discharged, the artist went to another hospital, where he spent a whole year, constantly painting. The works of that period finally shaped his style and became one of the best in the legacy of van Gogh.

Recognition and fame began to come to Vincent, but even they no longer pleased the artist’s soul, tormented by illness. He went to Auvers-sur-Oise, where, going for a walk, he shot himself in the heart. However, the suicide attempt failed, and the badly wounded van Gogh was able to get to the house himself. On the night of July 29, 1890, he died of severe blood loss. Theo was there the whole time.