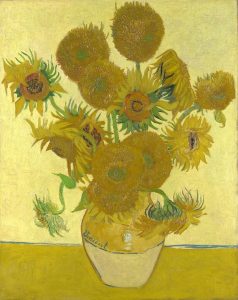 Sunflowers had a special meaning for Vincent van Gogh. He painted two cycles of paintings with them: Parisian (1887) and Arles (1888, four works with flowers in a decanter, to which this painting belongs). In fact, these flowers have become a kind of “brand” and a visiting card of the artist on a par with his hypnotic stars.

The Arles cycle was written to decorate the room of the painter’s friend, Paul Gauguin, in the Yellow House in Arles.

It is noteworthy that while working on the painting, van Gogh used the impasto technique, in which paints are applied in a very thick layer with the help of brushes and a knife. In this way, it is possible to achieve a relief pattern and its special rough surface.

The painting was painted in Arles in the autumn of 1888. Van Gogh painted it at night on the street, believing that if you do it in the studio, you can miss important details and shades.

For van Gogh’s work, this is a rather unique and iconic painting. It was here that he first painted the starry sky, which will soon become one of the most memorable elements of his work, and also depicted the night without using black at all, only shades of blue, purple, green and yellow. It is noticeable that it is yellow that dominates the picture, it acquires a special radiance, as if breaking through from the depths of the picture. However, the abundant use of yellow is a characteristic feature of the work of the late van Gogh.

Vincent van Gogh began work on the painting “Irises” a year before his death, in May 1889, just a week after he settled in the hospital of St. Paul of Mausoleum. He painted in the orphanage’s garden and finished it in just 2 months, sending it to his brother Theo.

The feature that distinguishes this work from the last created by the artist is the absence of tension and tangible anxiety in it. For van Gogh, his work became the only weapon in the fight against the disease, a way to tame and contain it.

At the same time, there is an influence on the composition and its general mood of Japanese ukiyo-e prints. Van Gogh borrowed unusual angles from them, highlighting contours in the foreground, as well as areas filled with solid color. The picture is filled with warmth, softness, smoothness and light, irises are full of life, not overshadowed by tragedy or illness. 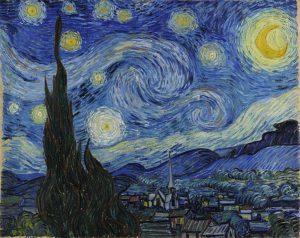 Perhaps this is one of the most recognizable paintings by Vincent van Gogh. It captures a view of the pre-dawn sky from the window of his bedroom in a mental hospital.

The work was written in just one day, but the author considered it not very successful. An important feature of the picture is that the landscape depicted in it is fictional. The artist almost always drew from nature, but he did not have such an opportunity in the hospital, so we actually see a compilation of those sketches that van Gogh made at different times and in different places.

And of course, the stars that amaze, beckon and seem to hypnotize! A special technique using short strokes actually “revives” the heavenly bodies. If you peer at them for a long time, it begins to seem that they are about to begin to move.

It is also worth noting how the artist managed to create the internal volume of the picture. Short straight lines – for houses and buildings (inanimate), smooth, ornate and swift – for bushes and trees. Because in nature there is nothing frozen and motionless.

This work was created in 1890 in French Provence and is one of the last works of Vincent van Gogh.

On the last day of January of this year, Theo van Gogh informed his artist brother of the birth of his son. The boy was named after his uncle, who, after receiving the news, immediately began to work on the painting. It was supposed to be a memorable gift for the baby and his parents.

The artist wanted the canvas to be hung in the bedroom of the spouses, and it symbolized, according to the artist, the beginning of a new life. This is the reason why van Gogh chose almonds. In the south of France, this plant begins to bloom very early, therefore it is considered a messenger of the imminent onset of spring, the resurrection of nature after winter and the birth of new life and hope.

It is noteworthy that “Blossoming Almond Branches” is not a picture that is quite familiar to the artistic heritage of van Gogh. On it, the viewer sees flowering branches that seem to float against the blue sky. But is it heaven? Even if we look at the picture for a long time, it remains not entirely clear: are we looking at a part of an almond crown against a turquoise sky or are these cut branches in a vase, which would be more typical of the work of a Dutch artist.